Mick and Nick ‘do it for the airtime’ 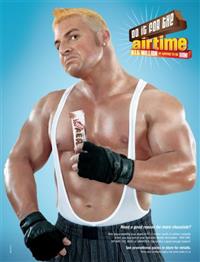 Mick and Nick gave South Africans the most unlikely stereotypes to indulge in Nestle countline chocolate bars. A stiletto and gold clad skinny kugel; a hardcore biker complete with thick moustache; and a muscle bound bodybuilder in revealing vest. This was the concept behind Nestlé’s ‘Do it for the Airtime’ in store promotion in which more than R1.5-million in airtime would be won instantly.

“The simple creative concept leveraged various stereotypes who wouldn’t normally indulge themselves, but over the promotional period have the perfect excuse of doing it for the airtime,” says Mick and Nick Creative Director, Nick Liatos.

To drive the promotion, radio and street-pole advertising was used in key metropolitan areas, while a high impact national POS campaign to over 1 000 retailers helped seal the deal at retail level.

Bulk SMS communication drove the promotion directly to Nestlé’s loyal consumer base, driving frequency of purchase and multiple entries, which reached over 40 000 entries per day at its peak.

“Creative concepts in promotional application make for more memorable connections with consumers and this type of volume driving opportunity isn’t simply about shifting stock, it’s about creating a piece of communication that does a brilliant job for both the brand and sales,” concludes Liatos.

Any cookies that may not be particularly necessary for the website to function and is used specifically to collect user personal data via analytics, ads, other embedded contents are termed as non-necessary cookies. It is mandatory to procure user consent prior to running these cookies on your website.